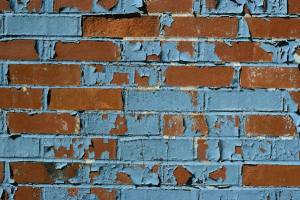 Does it feel like sometimes there’s a big, thick wall surrounding you, isolating you from all that is good on the other side?

I call this wall discouragement.  I don’t like it.

Are you discouraged?  What are the bricks in the wall surrounding you today?

In discouraging moments, it seems like God is far, far away.

Far away on the other side of the wall.

No matter how you cry, scream or wail, it’s though He doesn’t hear.

That’s where the discouragement lies – in the silence.

I’ve been surrounded by a silence lately in the midst of noise.  Can you relate?  The world is SO noisy yet what I long to hear most from is my heavenly Father.

I was blessed by a blogging friend as I read her post of discouragement (read it here) today.   I’ve been blessed by the faith of friends who are fighting for the life of their child.  People who refuse to stand, look at the wall, and give up.

I looked into the eyes of a young teen this week who was discouraged.  She was crushed, shot down, and believed she might as well follow the path of what an adult said she was going to become.

I poured into her the hope of her future, the possibilities ahead of her, her own skills, and the shortcomings of others. I saw the countenance on her face change, lifted from discouragement to hope.  She smiled.

Discouragement is a thief of courage.  {Dis} Courage.

It robs us of the truths we know in our hearts.  Truths about situations, people, and God.

Discouragement is a tool of the enemy to make us feel isolated from the goodness we can’t see behind the thick wall of silence.  He builds the wall high so we can’t see what is on the other side.

Courage is refusing to believe the lies discouragement tells us about a situation, people, and God.

Courage sees good things and believes truths we knew all along, but could not see.

Where do you need courage today?  Will you climb the discouragement wall with me?  I need a partner.  I need an army of like-minded folks to scale big walls that seem impossible to climb on my own.  Will you be my partner?

Together, we gain courage to scale the wall of discouragement to gain a different perspective and see truths from the other side.

Won’t you join me?

“Though one may be overpowered, two can defend themselves.  A cord of three strands is not quickly broken.” Ecclesiastes 4:12

What’s discouraging you this week?